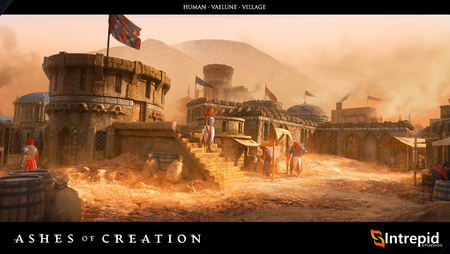 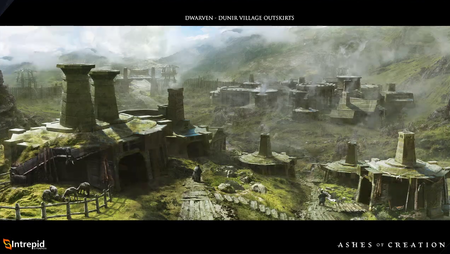 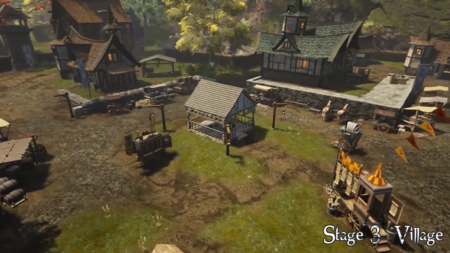 A village is the third stage of node advancement.[3]

At the Village Stage, the camp becomes a small frontier town. There are some permanent structures in place at this level, as well as the beginning of local Government. The Development Area feels permanent and lived in. You'll find buildings developed with more advanced materials, features such as stone and mortar, fences, and other common structures. The Village Stage will also unlock a Special Building that grants unique utility to its Node Type - Military, Economic, Divine or Scientific; we’ll share further details on those buildings in future entries in this series that cover each specific Node Type.[4] – Margaret Krohn

The advancement of a node unlocks its unique content, which comes at the cost of locking out an increasing ring of neighboring nodes from progressing to the next stage.[8]

The way that the algorithm expands the territories takes into account a few things: One it takes into account the coast like where's the closest coast. Two it takes into account the neighboring nodes so it can take over and essentially vassal state those nodes, but what's more important is essentially the initial population based on like how players choose their races. Because we have nine different races and four different starting points that branch out, each server's population density is going to dictate essentially the first few nodes that are highly populated and then that initial seed is what's going to determine the node structure as it moves inland into the into the world essentially; and based on the performance and successes of different sieges will determine which nodes that got locked out from the previous the initial advancements what nodes can now be available to advance further. So I really think that with so many variables that are present in the equation of how nodes advance and stay existing with the more variables you have, the higher likelihood there is for there to be a significant diversion in world progression.[12] – Steven Sharif

Normally the algorithm that's applied to the node territorial expansion will prevent significant nodes from being in close proximity to each other... There could be a perfect storm where all of the algorithmic progression of territory leads to having these nodes very close to each other because there's certain requirements that should that need to be available to satisfy node vassal takeovers; and it's possible that two nodes would never take each other over as vassals and end up kind of close together and spanning their territories in kind of opposite directions: The Tale of Two Cities kind of thing.[13] – Steven Sharif

Node experience gain opportunities will be equitable across the four node types.[16]

Different people have different resources invested in nodes progressing and it would be a little "gamey" if you could know exactly what was necessary at that point because that would disincentivize people from participating.[17] – Steven Sharif

Village (stage 3) or higher nodes enslave nearby nodes, converting them into vassal nodes.[6][11] 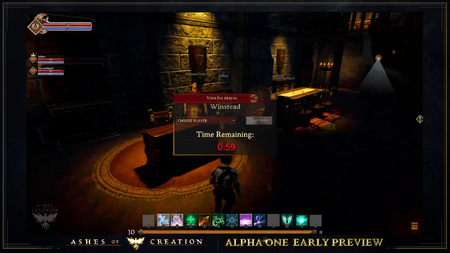 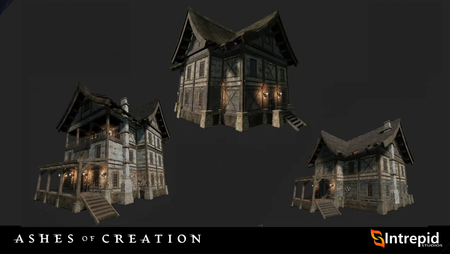 Buildings that offer goods and services, as well as purchasable housing are created when a node reaches village stage.[3]

Players buy the deeds for housing from the node itself.[25] Players can also buy and sell properties from other players.[3]

There's no cap essentially in player originated sales. Those are determined essentially by supply and demand as it is within the game and there's no artificial barrier to how high that demand can go.[37] – Steven Sharif

This will allow players to transfer real property goods. This includes ... static housing, this includes apartments that they may own; and they can sell those because those will have a limited and finite quantity.[40] – Steven Sharif

Rental and leasing concepts are currently under consideration.[40]

Some concepts that we have is going to be rental or leases that could be had allowing players to kind of lease a property for a period of time where they will have control rights over utilizing storage based on the area, controlling the furniture or access point; all that kind of stuff.[40] – Steven Sharif 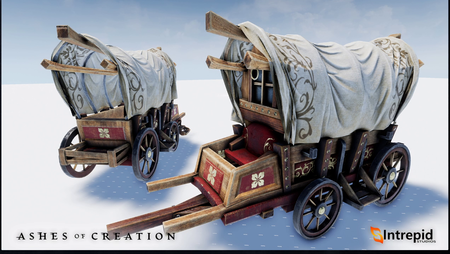 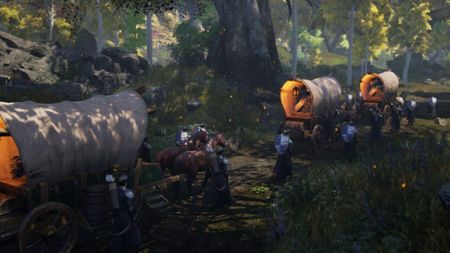 Caravans facilitate the transfer of goods for players wishing to turn a profit.[50]
Mayoral Caravan system - Work in Progress.[51]

The caravan system is an open world PvP system that revolves around opportunity and risk. Caravans facilitate the transfer of goods for players wishing to turn a profit.[50]

As some areas in the world grow, others will fall. This is the foundation of the living, breathing world that is Ashes of Creation, where players will have the ability to make important decisions that matter in the longevity of an area becoming a city, or whether to siege a rival town. Rise above the ashes, create the world around you, and be a part of the story that unfolds because of your actions and decisions.[4] – Margaret Krohn

Node sieges enable players to destroy nodes.[4] This paves the way for new development and access to the locked content in surrounding nodes. Due to this dynamic, political strife and intrigue play an important role in the structure of the world.[7]

Sieging nodes will not be an easy task for the attackers. Cities and metropolises will have a considerable defensive advantage.[7]

If you own a home in a node and you don't want to see that home destroyed, you need to defend that city![57] – Steven Sharif

The majority (~80%) of content in Ashes of Creation is open-world but there may be instanced battles within castle and node sieges where specific groups can participate in small, short-duration objective-based battles for specific waypoints.[58]

Death penalties do not apply to objective-based events (such as caravans, guild wars, and node sieges).[59]

Legion monster coin events are common events that occur for Nodes up to the Dorp stage. This might include a horde of zombies rolling across the countryside finding something or someone to feast on. Players who wish to keep their advancements will need to be vigilant.[60]

Elite monster coin events occur for nodes that exist between the Dorp and Metropolis stages. This level of event would include something along the lines of a dungeon level bosses and mobs coming into the world to pillage and destroy specific centers of activity.[60]